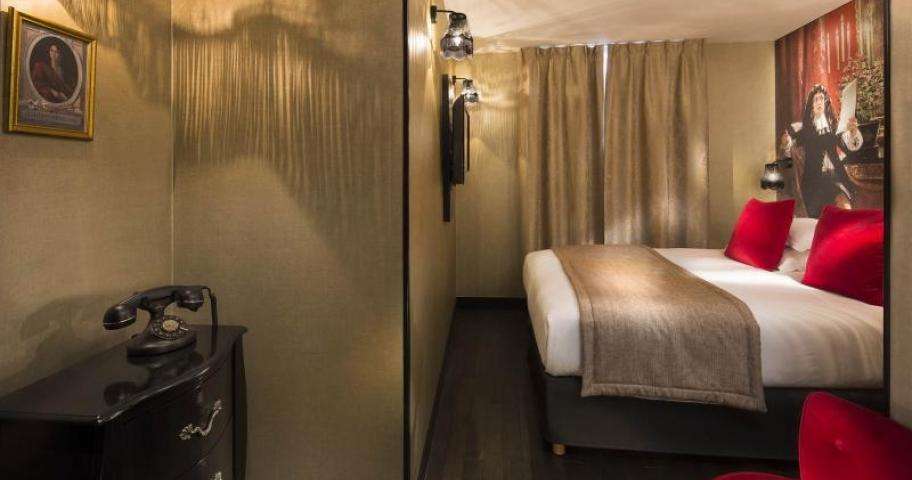 Sleeping with Molière by your side

Huge playwright, tireless actor, Molière occupies an especially prominent place in the history of the theatre. It is with great pleasure that we invite you to discover our "Molière" rooms, which have been designed and decorated in homage to those who remain in our hearts and offer a moving image of theatre and a life dedicated to the arts.

Under the laughter, the tears

With a sharp pen and a quick and ironic wit, Jean-Baptiste Poquelin, known as Molière, brilliantly describes the society of his time. A society that had lost its way and whose moral values hid injustice and hypocrisy. The Imaginary Invalid, The Precious Ridiculous, Le Bourgeois Gentilhomme, the Miser, the School of Women, all depict a society where conceit prevails over depth of character, and where vice dominates in the guise of virtue. The pen is nimble, mocking laughter comes quickly, but if the form seems light and humorous, the background is sad and revolted.

Dive into the atmosphere of Molière!

As its name suggests, the Hotel Les Theatres is entirely devoted to the dramatic arts. Posters of Dom Juan, Fourberies and Scapin, but also Waiting for Godot and Dindon de Feydeau line the walls of the entrance and continue up the stairs leading to the bedrooms. Past the gate, a world of red velvet, dark wood floors and gilded frames waits for you. Sitting on the bed, you can truly imagine being among the "precious" who watches from the floor, between chandeliers and bookshelves, as a man in a wig and black clothing reads out loud. Enjoy blending into the atmosphere of the seventeenth century salon, where laughter was sometimes too strong and interest often overrated, it was up to the court of the Sun King, protector of Molière.